For the Ambassador personally.

1) Upon receipt of this telegram, all of the cipher material still there is to be destroyed. The radio set is to be put out of commission.

2) Please inform Herr Molotov at once that you have an urgent communication to make to him and would therefore like to call on him immediately. Then please make the following declaration to him.

The Soviet Ambassador in Berlin is receiving at this hour from the Reich Minister for Foreign Affairs a memorandum giving in detail the facts which are briefly summarized as follows:

“I. In 1939 the Government of the Reich, putting aside grave objections arising out of the contradiction between National Socialism and Bolshevism, undertook to arrive at an understanding with Soviet Russia.

Under the treaties of August 23 and September 28, 1939, the Government of the Reich effected a general reorientation of its policy toward the U.S.S.R. and thenceforth adopted a cordial attitude toward the Soviet Union. This policy of goodwill brought the Soviet Union great advantages in the field of foreign policy.

“II. Soon after the conclusion of the German-Russian treaties, the Comintern resumed its subversive activity against Germany, with the official Soviet-Russian representatives giving assistance. Sabotage, terrorism, and espionage in preparation for war were demonstrably carried out on a large scale. In all the countries bordering on Germany and in the territories occupied by German troops, anti-German feeling was aroused and the German attempt to set up a stable order in Europe was combated. Yugoslavia was gladly offered arms against Germany by the Soviet Russian Chief of Staff, as proved by documents found in Belgrade.

The declarations made by the U.S.S.R. on conclusion of the treaties with Germany, regarding her intention to collaborate with Germany, thus stood revealed as deliberate misrepresentation and deceit and the conclusion of the treaties themselves as a tactical maneuver for obtaining arrangements favorable to Russia. The guiding principle remained the weakening of the non-Bolshevist countries in order the more easily to demoralize them and, at a given time, to crush them.

“III. In the diplomatic and military fields it became obvious that the U.S.S.R.-contrary to the declaration made at the conclusion of the treaties that she did not wish to Bolshevize and annex the countries falling within her sphere of influence-was intent on pushing her military might westward wherever it seemed possible and on carrying Bolshevism further into Europe.

The action of the U.S.S.R. against the Baltic States, Finland, and Rumania, where Soviet claims even extended to Bucovina, showed this clearly. The occupation and Bolshevization by the Soviet Union of the sphere of influence granted to her clearly violated the Moscow agreements, even though the Government of the Reich for the time being accepted the facts.

“IV. When Germany, by the Vienna Award of August 30, 1940, settled the crisis in Southeastern Europe resulting from the action of the U.S.S.R. against Rumania, the Soviet Union protested and turned to making intensive military preparations in every field. Germany’s renewed effort to achieve an understanding, as reflected in the exchange of letters between the Reich Foreign Minister and Herr Stalin and in the invitation to Herr Molotov to come to Berlin, brought demands from the Soviet Union which Germany could not accept, such as the guarantee of Bulgaria by the U.S.S.R., the establishment of a base for Soviet Russian land and naval forces at the Straits, and the complete abandonment of Finland.

Subsequently, the policy of the U.S.S.R. directed against Germany became more and more obvious. The warning addressed to Germany regarding occupation of Bulgaria and the declaration made to Bulgaria after the entry of German troops, which was of a definitely hostile nature, were as significant in this connection as was the promise to protect the rear of Turkey in the event of a Turkish entry into the war in the Balkans, given in March 1941.

“V. With the conclusion of the Soviet-Yugoslav Treaty of Friendship of April 5 last, which was intended to stiffen the spines of the Yugoslav plotters, the U.S.S.R. joined the common Anglo-Yugoslav-Greek front against Germany. At the same time she tried rapprochement with Rumania, in order to induce that country to detach itself from Germany. It was only the rapid German victories that caused the failure of the Anglo-Russian plan for an attack against the German troops in Rumania and Bulgaria.

“VI. This policy was accompanied by a steadily growing concentration of all available Russian forces on a long front from the Baltic Sea to the Black Sea, against which countermeasures were taken by Germany only later.

Since the beginning of the year this has been a steadily growing menace to the territory of the Reich. Reports received in the last few days eliminated the last remaining doubts as to the aggressive character of this Russian concentration and completed the picture of an extremely tense military situation.

In addition to this, there are the reports from England regarding the negotiations of Ambassador Cripps for still closer political and military collaboration between England and the Soviet Union.

“To sum up, the Government of the Reich declares, therefore, that the Soviet Government, contrary to the obligations it assumed,

1) has not only continued, but even intensified its attempts to undermine Germany and Europe;

2) has adopted a more and more anti-German foreign policy;

3) has concentrated all its forces in readiness at the German border. Thereby the Soviet Government has broken its treaties with Germany and is about to attack Germany from the rear, in its struggle for life. The Führer has therefore ordered the German Armed Forces to oppose this threat with all the means at their disposal.” 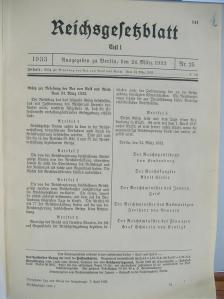 Law to Remedy the Distress of the People and the Reich

The Reichstag has enacted the following law, which is hereby proclaimed with the assent of the Reichsrat, it having been established that the requirements for a constitutional amendment have been fulfilled:

Laws enacted by the government of the Reich may deviate from the constitution as long as they do not affect the institutions of the Reichstag and the Reichsrat. The rights of the President remain undisturbed.

Treaties of the Reich with foreign states, which relate to matters of Reich legislation shall for the duration of the validity of these laws not require the consent of the Reichstag. The Reich government shall adopt the necessary legislation to implement these agreements.

This law enters into force on the day of its proclamation. It expires on April 1, 1937; it expires furthermore if the present Reich government is replaced by another.

Decree of the Reich President for the Protection of the People and State of 28. February 1933

On the basis of Article 48, Section 2, of the German Constitution, the following is decreed as a defensive measure against Communist acts of violence that endanger the state:

Articles 114, 115, 117, 118, 123, 124, and 153 of the Constitution of the German Reich are suspended until further notice. Thus, restrictions on personal liberty, on the right of free expression of opinion, including freedom of the press, on the right of assembly and the right of association, and violations of the privacy of postal, telegraphic, and telephonic communications, and warrants for house searches, orders for confiscations as well as restrictions on property are permissible beyond the legal limits otherwise prescribed.

If any state fails to take the necessary measures to restore public safety and order, the Reich government may temporarily take over the powers of the highest state authority.

State and local authorities must obey the orders decreed by the Reich government on the basis of § 2.

Whoever provokes, appeals for, or incites the disobedience of the orders given out by the supreme state authorities or the authorities subject to them for the execution of this decree, or the orders given by the Reich government according to § 2, can be punished – insofar as the deed is not covered by other decrees with more severe punishments – with imprisonment of not less than one month, or with a fine from 150 to 15,000 Reichsmarks.

Whoever endangers human life by violating § 1 is to be punished by sentence to a penitentiary, under mitigating circumstances with imprisonment of not less than six months and, when the violation causes the death of a person, with death, under mitigating circumstances with a penitentiary sentence of not less than two years. In addition, the sentence may include the confiscation of property.

Whoever provokes or incites an act contrary to the public welfare is to be punished with a penitentiary sentence, under mitigating circumstances, with imprisonment of not less than three months.

Insofar as a more severe punishment has not been previously provided for, the following are punishable with death or with life imprisonment or with imprisonment not to exceed 15 years:

This decree enters into force on the day of its promulgation.

Reich Minister of the Interior Frick