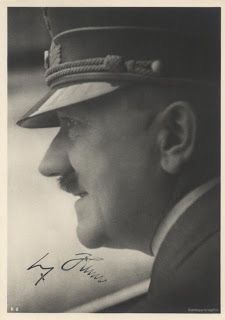 March 31st, 1920.  Adolf Hitler is officially discharged from Reichswehr. As I have already stated, Hitler was the “quintessential Army man”. In other words, he had no skills useful in the civilian life.

Consequently, the only was he could be successful in a civilian life was… to create his very own Army. And subsequently to transform the whole German society into one. And that’s precisely what he did: even without the Stormtroopers (SA) – his private army of sorts, his NSDAP was a genuinely military organization, complete with its own system of (para)military ranks and an Army-style organizational structure.

After Adolf Hitler acquired the dictatorial powers in Germany (after both chambers of the German parliament passed the so-called Enabling Act on March 23rd, 1933), he promptly transformed the German state (in fact, the whole German society) into one giant Army. The totalitarian Führerstaat.