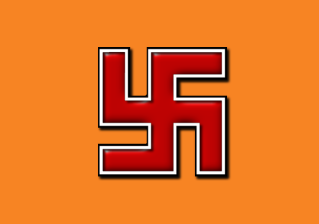 Early May, 1919.  Adolf Hitler gets noticed by the Thule Society. Unlike all previous entries/sections in this chapter (i.e. in Hitler’s timeline/bio), this one is highly speculative.

Because we do not know for sure (and most likely will never know) how, when and why the Thule Society noticed Adolf Hitler and why on Earth it decided to transform (“transfigure”) him into Der Führer. The most successful political entrepreneur in modern history.

Consequently, it would be safe to assume that Adolf Hitler was born with certain unique mystical/psychic/paranormal capabilities. Of which he was only vaguely aware of… until he began his incredibly successful career of an orator and a political entrepreneur.

There is no solid evidence that Adolf Hitler was ever interested in any kind of mysticism – whether Christian or occult (neo-pagan). However, it is known that he made the swastika – a deeply mystical Christian symbol (not only Christian, of course, but a Christian as well) the emblem/logo of his Nazi party and of his state – the Führerstaat.

One Adolf Josef Lanz (who called himself Lanz von Liebenfels) – an Austrian political and racial theorist and occultist (and a pioneer/inventor of Ariosophy) claimed not only that Adolf Hitler was an avid reader of the Ostara magazine (founded and published by Lanz) but that they have actually met in person and that Lanz even supplied young Hitler – free of charge – with two missing copies of the magazine.

There are also rumors that Lanz visited the Lambach Abbey (and even spent two weeks working in its impressive library) in 1899… when Adolf Hitler was a chorister in its church. No one claims that Hitler and Lanz met at that time, though.

There is no independent confirmation of these claims… except that after the Anschluss of Austria in 1938, Lanz applied to Hitler for patronage (which made no sense unless the claims of Lanz were true).

Instead, Hitler banned von Liebenfels from publishing his writings, and the surviving copies of Ostara (the magazine ceased to exist in 1931) were removed from circulation. And in 1942 Hitler ordered the suppression of Ordo Novi Templi (ONT) – an occult organization founded by Lanz. Incidentally, ONT was the first organization to openly use the swastika in an “Aryan” (racial) meaning.

However, these decisions and actions by Adolf Hitler do not really prove (or disprove) anything. It is well-known that he treated the Thule Society in just about the same manner, severing all ties between the Society and the Nazi Party right after he became Der Führer of the latter. He did it despite the fact that he owed to Thule Society… just about everything in his success.