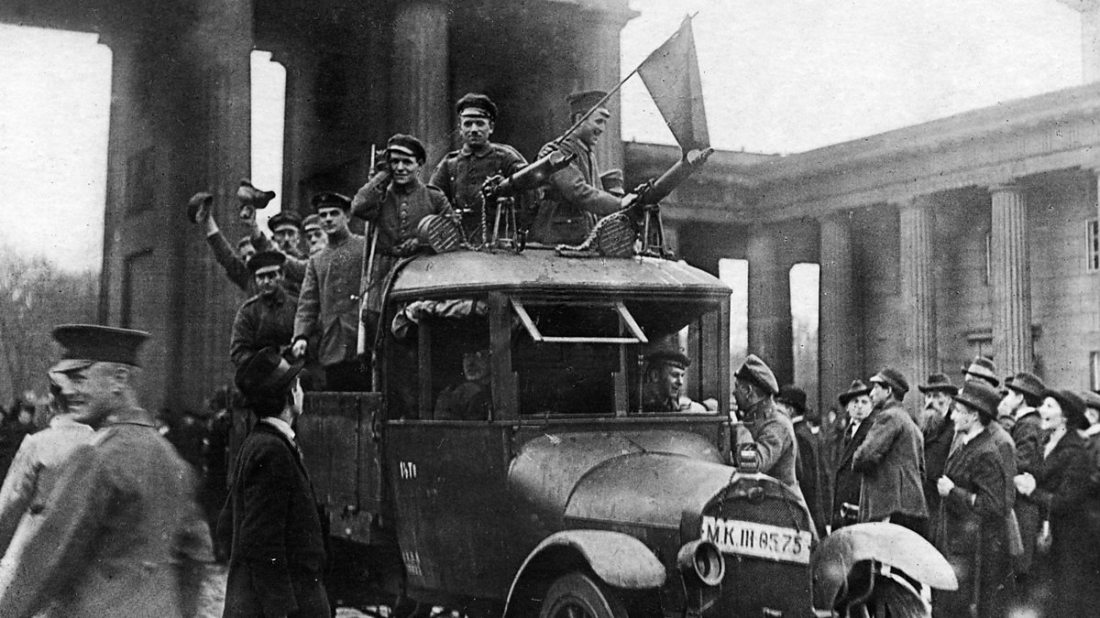 November 9th, 1918. The November Revolution in Germany which did away with monarchy, the Second Empire and transformed the Imperial Germany into a republic. The Weimar Republic.

Contrary to what Adolf Hitler (and the Nazis) believed, the November Revolution in Germany was not really unique. In fact, all empires that were defeated in the Great War – German, Austro-Hungarian, Russian and Ottoman – went through revolutions that did away with the corresponding monarchies and empires in 1917-22 (Ottoman Sultanate was abolished in 1922 and the empire was dissolved a year later). Russia went through two consecutive revolutions in just eight months – the democratic one in March of 1917 and a totalitarian (Bolshevist) one in November.

The only uniqueness of Germany was the fact that it was an ethnically homogenous country (compared to all other abovementioned empires). Consequently, unlike all others, it did not disintegrate (it lost territories not due to the revolution but as the result of an “armed robbery at Versailles”).

One of the reasons for a radical reengineering of ethnically heterogeneous empires (Russian, Austro-Hungarian and Ottoman) was obviously the desire of smaller nations (Poles, Czechs, Slovaks, Hungarians, Finns, etc.) to create their very own independent nations. Many (if not the majority) of Austrians wanted the same thing, although a significant number of them favored unification with Germany.

This burning and overwhelming desire (obsession even) was practically the only factor in Austro-Hungarian Empire, the dominant one in the Ottoman Empire, the secondary one in Russia… and did not exist at all in Germany –ethnically homogenous nation.

The Second Reich was brought down by Germans (both the “common folk” and the elites) for a reason which was practically the singular one in Germany, the dominant one in Russia and a minor one in both Austro-Hungarian and Ottoman Empires.

This reason (factor) consisted of two very much deadly sins – hatred (wrath) and fear. Hatred for the existing political and government system and its embodiments (i.e. the monarch) for its real or perceived wrongdoings and fear that – if allowed to exist – it will make things worse for the population of the country in question. Much worse. Radically worse.

It is an indisputable fact that you can not build a happy future (or anything long-lasting for that matter) on deadly sins of fear and hatred. Consequently, it is no surprise that the hapless Weimar Republic met its miserable demise mere 15 years after its establishment.

As did the Third Reich – also built on fear and hatred (12 years after its establishment) and the Bolshevist Soviet Union (ditto) that lasted for 74 years as Stalin turned out to be a far more efficient leader and statesman than Adolf Hitler. Maybe because the former was a bureaucrat (i.e., government manager) and the latter – a political entrepreneur (the latter is a far riskier occupation).

Germans and Russians hated their monarchies and monarchs for very obvious (and mostly correct) reasons. First, both the Kaiser and the Tsar lost the Great War (at the time of the corresponding revolutions it was obvious for just about everyone that the war was hopelessly lost).

Second, living standards of the population radically plummeted. Worse than that, in both nations food shortages (believed to be the result of government incompetence) led to a genuine hunger. The hunger that was killing the populations by tens of thousands every month.

The government (and the monarchs) were perceived by the overwhelming majority of the population (top to bottom of the social ladder) as incompetent and corrupt. And so were the respective governments. The government incompetence charge was correct in both cases while the corruption one in Germany was not. Which did not help the Second Reich at all.

Both the Germans and the Russians were (understandably) afraid – scared almost to death, actually – that the existing government system will inevitably lead to a genuinely catastrophic defeat in the war (which was not the case in either nation) and a further radical decline in living standards (ditto).

Hence, a radical reengineering of existing political and government systems in both Russia and Germany was probably not a very good idea. In Russia, the transformation of the country into a Western-style constitutional monarchy would have been sufficient (although Nicholas II had to be replaced by someone at least a little more competent)

In Germany there was no need to dispense with The Kaiser, the monarchy and the empire at all. It was all pure emotion – which predictably led to genuinely catastrophic consequences both in the short and in the long term.

The November Revolution of 1918 was one of the defining events in the life of Adolf Hitler as his ideology, his program, his plans, his decisions and his actions in the next decades were to a very significant extent determined by his overwhelming desires to undo the (real and perceived) damage done to Germany by the “November Criminals” as he and other Nazis called the leaders of the Weimar Republic.

By November of 1918, Adolf Hitler was already a quintessential “Army Man”. Consequently, for him it was unthinkable even to contemplate (let alone attempt) to overthrow the government and the leader of the nation during the time of war (and at the time of the Revolution Germany was still at war with the Allied coalition). For any reason whatsoever.

Consequently, for Adolf Hitler the November Revolution was the act of a high treason – regardless of the intentions of the revolutionaries. Consequently, all its participants (let alone leaders) were traitors and criminals who deserved the only punishment he considered sufficient. Death.

These were his perceptions of the November Revolution – and, as any competent psychologist would confirm, perceptions are the only reality…