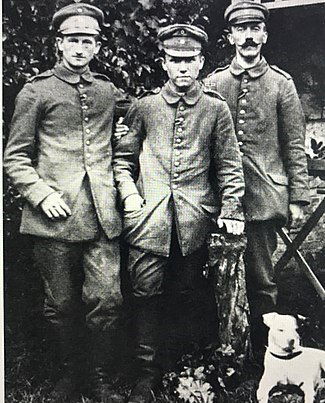 July 17th, 1918. The deposed Russian Emperor Nicholas II is murdered by the Bolsheviks – with his family and servants. The order to kill the Tzar and his family came directly from the Bolshevist leader Vladimir Lenin – it was a revenge (cut and dry, plain and simple) for the execution of Lenin’s elder brother Alexander Ul’yanov thirty years earlier.

Although Adolf Hitler was no monarchist (his ideal system of government was the Führerstaat), he was horrified by this horrendous crime. Because it meant that was really nothing sacred for the Bolsheviks – and thus they had to be prevented from coming to power at all cost.

Another fact that undoubtedly made a powerful impact on Adolf Hitler was the nationality of the leader of the firing squad that killed Nicholas II, his family and their servants.

This individual – Yakov Yurovsky – was Jewish. The fact that Yurovsky publicly repudiated his Jewish roots by being baptized Lutheran did not make any difference to Adolf Hitler whatsoever.

For him the very fact that the murder of the Russian Emperor was planned, organized and executed by a Jew, proved beyond the reasonable doubt that (1) it was a Jewish “ritual murder”; and (2) that Bolshevism was, indeed, a key part of Jewish conspiracy to destroy the Western Civilization as he knew it.

Both conclusions were, of course, utterly and completely wrong; however, they became one more “layer of snow” that 23 years later will trigger the “Holocaust avalanche”.

August 4th, 1918. Adolf Hitler receives Iron Cross First Class – a decoration rarely awarded to one of Hitler’s Gefreiter rank (one had to do something really outstanding – well above and beyond the call of duty – to earn it).

Which Adolf Hitler did – Hitler’s Iron Cross First Class was awarded after an attack in open warfare during which messengers were indispensable (message delivered by Adolf Hitler in time and under heavy enemy fire saved more than a hundred lives). Given the fact that this decoration was the only one that Hitler wore for the rest of his life, he was very proud of his achievement and bravery on that day.

Curiously enough, Hitler received this award on a recommendation by Lieutenant Hugo Gutmann, Hitler’s Jewish superior (commanding officer). When Adolf Hitler came to power, he protected Gutmann from persecution and helped him emigrate first to Belgium and then to the United States.

August 18th, 1918. The Thule Society – a mysterious occult group – is founded in Munich. All evidence points to an inescapable conclusion – the society had but one objective: to provide Adolf Hitler with the “critical mass” of resources to launch his stellar (for 22 years) career of a political entrepreneur – the most successful one in modern history.

Indeed, the Thule Society provided Adolf Hitler with highly valuable connections and associates, money, the newspaper… and even carried out (sometime during the summer of 1919) his transfiguration from essentially a nobody (an outcast, a misfit a loser with zero managerial experience or aspirations) into a political and administrative genius – the most successful political entrepreneur and statesman in modern history.

September 28th, 1918. Adolf Hitler miraculously escapes death for the third time (fourth, if you take into account the Slaughter of the Innocents at Ypres).

On that date, one Henry Tandey (the most highly decorated British private of the First World War) encountered a lone German soldier near the French village of Marcoing.

Tandey got an impression that the German was wounded – to the point of being unable to raise his rifle – and, being a man of honor, chose not to shoot. That soldier was… Gefreiter Adolf Hitler.

In 1938, when Neville Chamberlain (then Prime Minister of the United Kingdom) visited Hitler at his alpine retreat (the Berghof) for the discussions that ultimately led to the infamous Munich Agreement, Hitler allegedly told him about the incident:

That man came so near to killing me that I thought I should never see Germany again; Providence saved me from such devilishly accurate fire as those English boys were aiming at us

According to the story, Hitler asked Chamberlain to convey his best wishes and gratitude to Tandey (which the latter apparently did). Since then, every unsuccessful assassination attempt only strengthened Hitler’s belief in being under protection of the Almighty Providence. As long as he fulfils his (at the time yet unknown) Divine Mission.

October 15th, 1918. Adolf Hitler is poisoned by the mustard gas (ironically, a German invention), temporarily blinded and shipped to a hospital in Pasewalk. There he finds out that he suffered a permanent damage to his eyesight that would make it impossible for him to become a painter (let alone an architect).

It is well-known that “sometimes not getting what we want is a wonderful stroke of luck” – or an Act of God, if one believes in the latter. And that when God permanently closes one door, He at the very same moment opens another – to a much better future.

It is not known whether Adolf Hitler thought about it that way, but nevertheless God (by closing the door to painting and architecture) opened for Adolf Hitler the door into politics. The door that in twenty years will make him the most successful political entrepreneurs in modern history.