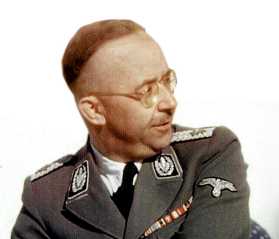 As I have already mentioned, SS-Reichsfuhrer had at least one personal agent inside the coup – one Hans Bernd Gisevius. Consequently, he knew everything he needed to know about the Oster/Halder conspiracy in 1938… and in 1941 (we are in the realm of alternate history here).

After he received sufficiently detailed information about Oster/Halder Conspiracy II, Himmler had two options. The first one was obvious – expose the conspiracy to his boss Adolf Hitler, get his permission to arrest the conspirators, arrest them… in other words do just about the same thing he will do after the miserable failure of July 20th plot. Only this time “before it happens”.

However, saving the life of Adolf Hitler was not exactly what SS-Reichsfuhrer wanted. In fact, he wanted exactly the opposite – get the former killed and become a de-facto Führer himself.

So I am pretty sure that Heinrich Himmler (a really devious character) would have chosen a very different – and a far riskier – option. He would have allowed Commando Oster (or whoever its actual commander would be in this case) to ambush and kill Hitler – but annihilated (he had plenty of resources to make it happen) the teams sent to kill him and official successors – Göring and Hess (the latter by that time would have triumphantly returned to Germany).

And then used his Waffen-SS, Fallschirmjäger units and other ground forces of the Luftwaffe (even the Stuka dive bombers, if necessary) to suppress the coup, arrest the plotters, take full control over the Wehrmacht and integrate it into the State Protection Corps (thus executing the very much hostile takeover).

Officially acting on the orders of Hermann Göring – the official successor of Adolf Hitler in the case of the latter’s death (Rudolf Hess was the next in line after the Reichsmarschall).

In reality, Göring who had neither the desire, nor the ability (nor the resources for that matter) to govern the Reich, would have eagerly made Himmler the de-facto Führer immediately after becoming one de-jure.

And in a few months (at most) would retire to his beloved Carinhall northeast of Berlin in picturesque Schorfheide forest, opening the way form Himmler to become the Führer de-jure. Allowing the latter to become the transformation of Germany and German-controlled territories into SS-Staat.

Could SS-Reichsfuhrer have pulled it off? IMHO, his chances were roughly 70/30 versus the Wehrmacht generals.

What would have been the consequences? Had the generals won, we would most likely have seen the reincarnation of Imperial Germany – the Fourth Reich (possibly even officially) that would have been even more elitist and thus even less democratic than the Second one.

And very probably the #1 superpower as Germany would have surely annexed and incorporated into the Reich the whole Poland, Ukraine, Belarus, the Baltic nations and a significant chunk of Russian territory.

Would it have been a change for the worse for the Poles? Oh, yes. And for the Czechs, too – compared to their independence. For much worse, I would think. The same will be true for the Baltic nations – Lithuania, Latvia and Estonia, I am sure. As for Belarus, Ukraine and Russia – I do not think so. Generalplan Ost and Imperial Germany are not compatible at all (to put it mildly) so it is very much possible that under the German rule “all of the above” would have been far better off than under the murderous Bolshevik regime.

Had Himmler won… I would expect all West European nations conquered by Wehrmacht to become German protectorates. Their independence will be a thing of the past and they will be ruled by and iron fist of the SS. “The Man in the High Castle” would probably have been a reasonably accurate portrayal of the regime in those countries.

In the East… in the East the Nazi regime (surprise, surprise) would have been almost completely the same as in the West. For a very simple reason – Heinrich Himmler was a pragmatist (unlike the Wehrmacht, his Waffen-SS was a truly multinational and multicultural force and it was him, not Wehrmacht generals who let General Vlasov form the Russian Liberation Army).

Himmler had no desire to fight the nationwide revolt in occupied territories (an inevitable reaction to the genocide of the native population). Nor would he want to see the resurgence of the Red Army and of the Soviet state (also inevitable in that case).

Consequently, he would probably try to arrive at some kind of a win-win situation (for the local population, compared to life under Bolsheviks, of course). The Jews, however, would have been annihilated (there would have been no Holocaust under the new German Empire, of course).

Poland and Czechoslovakia would have been much better off under Wehrmacht generals than under Himmler (obviously), but much worse off in terms of territories and regime (in both cases) than in reality.

For the German-occupied territories of the Soviet Union life under the Fourth Reich would have been far better than under the SS-Staat. And way, wat better than in reality (no Communist dictatorships, no loss of life and no wholesale destruction). Life under SS-Staat would have been probably comparable to that under Communist regime (minus the destruction and colossal loss of life).

The abovementioned analysis leads us to the following conclusions (which the “mainstream” historians would not like one bit). Had Adolf Hitler won the war, there was about 30% chance that this outcome would have been far better for all parties involved compared to what happened in reality.