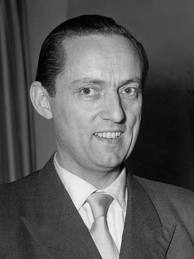 There is strong (albeit still circumstantial) evidence that Die Neue SS made an attempt to take over Germany in 1953. West Germany, to be more precise. This incident even got a name – The Naumann Affair – after a German politician who allegedly was a mastermind of this (unsuccessful) plot.

Werner Naumann was quite a colorful character even by the standards of the Third Reich, which had no shortage of these (to put it mildly). An economist by training, he was a Nazi by conviction, not out of careerism.

He joined NSDAP in 1928, when the party was at its’ lowest point in terms of election results (both at the national and state level where it got less than 3% of the votes). Although he did not serve in the German armed forces, he joined the Nazi stormtroopers and made quite a career in the SA, rising to the rank of Brigadeführer (Brigadier General) in 1933.

Apparently he had a good nose for trouble because (despite his high rank and position with the brownshirts), he abruptly quit the SA and joined the SS instead (ultimately rising to the same rank as in the SA).

His nose for opportunity was obviously at least as good because in no time he joined the Freundeskreis Reichsführer SS (Circle of Friends of the Reichsführer SS).

The official name of this organization was The Freundeskreis der Wirtschaft, or Circle of Friends of the [German] Economy. It was a group of German industrialists (and high-ranking SS officers) whose aim was to strengthen the ties between the Nazi Party, on the one side and business and industry, on the other.

In addition to a list of prominent industrialists (that read like a Who is Who in German industry and finance), the members included Hjalmar Schacht (president of Reichsbank, Reich Minister of Economy and the key architect of German economic miracle of 1933-38).

As well as the key SS generals responsible for business and economic issues – Obergruppenführer Oswald Pohl, head of the Administrative and Economic office of the SS; Gruppenführer Dr. Otto Ohlendorf, a prominent economist and one of the leading economic experts in the SS; SS-Brigadeführer Fritz Kranefuss – a well-conneted international businessman (among other things) and a member of Himmler’s personal staff, etc.

Freundeskreis Reichsführer SS was formed (in 1932) and coordinated by one Wilhelm Keppler, one of Adolf Hitler’s close economic advisors… and a close friend of Heinrich Himmler. Not surprisingly, Keppler was ultimately promoted to the rank of SS-Obergruppenführer (a three-star general).

Relationship between Keppler and Himmler was so close that the whole thing was considered as the tool that the latter used to establish control over the whole German economy (which he by and large achieved by mid-1944) and Hitler’s economic decisions (apparently, in this department Himmler was far less successful).

Anyway, there is little doubt that the abovementioned Circle (i.e., its members) were one of the key tools that Himmler used in 1944-45 to provide ODESSA (Die Neue SS) with enormous amounts of financial assets taken out of German economy and moved abroad – not just to neutral nations (Sweden, Switzerland, etc.) but even to nations which were very much at war with the Third Reich (Britain, the USA, etc.).

Hence, it would be safe to assume that Werner Naumann (being an economist by training) played an important role in the whole operation and thus (most likely) became an active and valuable member of Die Neue SS – and a no less active and valuable participant in the Fourth Reich project.

Naumann was no coward – he joined Waffen-SS and fought with honor on the Eastern Front. On May 1st, 1945, he was the leader of break-out group number 3 from the Führerbunker in Berlin.

The group included Martin Bormann, Hans Baur, Ludwig Stumpfegger and Artur Axmann. One Erich Kempka (Hitler’s primary driver in 1934-45) later testified at Nuremberg that he had last seen Naumann walking beside Bormann when a Soviet artillery shell exploded near them.

Bormann was severely injured, could not move and took his life by biting a cyanide capsule to avoid being captured by the Soviets, but Naumann miraculously escaped unharmed. Ultimately only Naumann and Axmann escaped from the Soviet Red Army encirclement of Berlin and made it to the Allied occupation zone.

This little incident proves two important points. First, Naumann was experienced, respected and lucky military commander. Second, it was possible to escape Berlin even after Hitler’s suicide (which means that Heinrich Müller could have done that and went underground with Himmler and other ODESSA members).

Interestingly enough, Naumann’s primary occupation in Nazi Germany was not economics, but… propaganda. For some reason he became a personal aide to Joseph Goebbels and in 1942 became his assistant secretary.

So what do we have here… a close associate of Heinrich Himmler, a member of his de-facto economic team; a well-trained economist, an important player in the conspiracy to transfer immense financial assets abroad during the last year of the war, an SS general, a courageous, respected and efficient military commander and a propaganda expert… sounds like an ideal candidate for the position of the Führer of the Fourth Reich.

Looks like Heinrich Himmler was of the same opinion. Naumann was considered too much of a “major offender” to operate in the open immediately after the end of the war so he understandably lived under an assumed name for five years (without a doubt supported by ODESSA).

He reemerged after the 1950 amnesty and immediately began working on overthrowing the West German government and establishing the Fourth Reich. The plan was simple and straightforward – infiltrate a major political party (he chose the Free Democrats as the most pro-Nazi one), win the elections, form the government, establish the dictatorship and ultimately restore the Third Reich. In other words, follow Hitler’s playbook (adapted to the realities of the post-war West Germany).

Did not work. The realities turned out far too different – Bundesrepublik Deutschland in 1953 was way too different from the Weimar Republic of 1932. So Naumann was arrested by the British Army on 16 January 1953 for “being the leader of a Neo-Nazi group that attempted to infiltrate West German political parties”.

However, he got just a slap on the wrist – he spent only seven months (!) in jail and his only punishment was a lifetime ban to participate in any political activities (i.e., elections). Later on, he became director at a metal firm owned by Goebbels’ stepson Harald Quandt. He died in 1982 in Lüdenscheid in North Rhine-Westphalia, West Germany, aged 73.

Apparently, the Naumann affair convinced Himmler and the whole Die Neue SS of the futility of any attempts to come to power using the opportunities and instruments provided by the democratic Federal Republic of Germany.

So they had to wait for the “Singularity Event” (political and social singularity that is) that will do away with liberal democracy and create substantial demand for the Fourth Reich. Or work on triggering this Singularity Event.