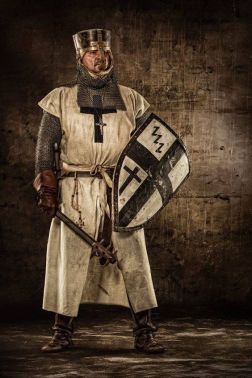 I am Roman Catholic by faith and, unlike many (if not most) Christians, do not keep my faith separate from my professional work. In other words, I do not pretend that I am just another secular historian who does not believe even in the existence of supernatural entities (let alone in their influence on individual and events in our world).

Consequently, the Christian God (the Holy Trinity), angels, demons, Heaven, Hell and, yes, human sins are as real for me as are the “creatures in flesh and blood” such as Adolf Hitler, for example.

However, I disagree with both secular historians – who claim (explicitly or implicitly) that God and other intangible, spiritual entities do not exist; and with Christian fundamentalists who believe (and preach) that we human beings are mere pawns in a colossal, Universe-wide chess game between God and his adversary – the Satan.

My personal theology is that God respects human Freedom of Will and – as long as we do not create an existential threat to ourselves (i.e., to our civilization as we know it), He does not intervene in any material way in our affairs.

And thus condones even genocides and democides (i.e. the ones committed by Turks, Nazis, Bolsheviks, etc.) and other mass murders – if they do not threaten the existence of the whole human race (i.e. remain “local” compared to the size of the whole humanity).

Only when someone (i.e. Stalin and other Bolsheviks) become an existential threat to mankind, God interferes. Either by choosing the Protector (a Savior, if you will) – such as Adolf Hitler (and protecting him at all times) or by committing an Act of God (i.e. the Reichstag Fire). Or both.

Hence, although the abovementioned spiritual entities do show up in my book, they do it rarely enough for the book to remain largely a “regular” product of a very much secular science.

And even when they do show up, my narrative is still based on three cornerstones – irrefutable facts, rock-solid logic and good old common sense. I simply demonstrate (hopefully beyond the reasonable doubt) that the “supernatural hypothesis” (which it formally is) provides a far better explanation of the events than the “natural” one.