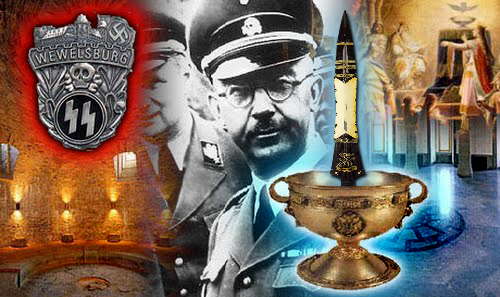 Unlike political neo-Nazism, Esoteric Nazism (sometimes called Esoteric Hitlerism) is a purely spiritual movement – although some Neo-Nazis do include elements of EN into their ideology.

Esoteric Hitlerism is a fundamentally wrong term because Adolf Hitler, though a mystic (and an extremely powerful at that) was no occultist. He considered everything occult, esoteric and the like delusional and childish – and even persecuted some of the occultists (astrologers, clairvoyants, etc.). Hence, I will use the term EN instead.

EN refers to any of the multitude of mystical interpretations and adaptations of Nazism in the post–World War II period. After 1945, perceived esoteric elements of the Third Reich (more precisely, the ones developed by Heinrich Himmler for his version of Nazi ideology) were adapted into new völkisch religions practiced by some white nationalists and Neo-Nazis.

Just about everything written by the proponents of Esoteric Nazism reads like… well, fiction (and not really a great one). Which it actually is. Books on EN connect Aryan master race beliefs and Nazi escape scenarios with enduring conspiracy theories about hollow earth civilizations and shadowy new world orders, Shambhala and the star Aldebaran as the original homeland of the Aryans, Vril energy, the hidden Agartha civilization, underground UFO bases, Hitler’s and the SS’s supposed survival in underground Antarctic oases in New Swabia, an alliance with Hyperboreans from the subterranean world into… well, a total mess (to put it mildly).

Savitri Devi – one of the de-facto founders of EN – preached the beliefs that could only classified as bizarre (to put it mildly). According to these beliefs, subsequent to the fall of the Third Reich and his suicide in the Führerbunker, Adolf Hitler could (and should) be deified. In other words, worshipped as a demi-God.

A Christian (sort of) variation of this quasi-religion claims that Adolf Hitler, Heinrich Himmler and other Nazi leaders did not go to Hell – or Heaven, for that matter. Neither did they go to Purgatory.

Instead, they went to Valhalla – a very special place in a spiritual (intangible) world reserved for the warriors that were fighting to protect the Western civilization from the existential threats (in Nazi case – the one of Bolshevism).

From their residence in Valhalla, they can communicate with the mystically gifted individuals in our world (directly) and with our world as a whole (via portals such as Wewelsburg or Wannsee House).

Another EN founder (of sorts) was one Robert Charroux. Curiously, he was not a neo-Nazi himself (although he was interested in racialism – the belief that the human species is naturally divided into races – ostensibly distinct biological categories).

However, his writings on Hyperborea influenced EN followers significantly enough for him to be considered one of its “founding fathers”. According to him, Hyperborea was situated between Iceland and Greenland and was the home of a Nordic white race with blonde hair and blue eyes.

Charroux claimed that this race was extraterrestrial in origin and had originally come from a cold planet situated far from the sun. He also claimed that the white race of the Hyperboreans and their ancestors, the Celts (he was a committed Celtic nationalist), had dominated the whole world in the ancient past.

In the 1980s and 1990s one David Myatt (a Tanganyika-born British author, poet and philosopher – and a former neo-Nazi) developed a revisionist version of National Socialism which (unlike the previous EN versions) involved neither ancient mythology nor extraterrestrial beings.

Instead Myatt, described as “most commonly associated with the occult wing of the National Socialist movement described National Socialism as “unambiguously a religion where Adolf Hitler is treated unashamedly as the savior of mankind”.

Which the latter unquestionably was as he did save Germany, Europe and the whole Western Civilization (and the whole world) from being conquered and destroyed by the Bolshevist Soviet Union.

However, National Socialism (at least according to Adolf Hitler) was definitely not a religion as there was nothing supernatural about it whatsoever (Hitler always stated that his ideology was based on science, not faith).

Carl Gustav Jung (one of the most influential psychologists) described “Hitler as possessed by the archetype of the collective Aryan unconscious who thus could not help obeying the commands of an inner voice” (a highly doubtful statement if you ask me as Hitler demonstrated no signs of being possessed by anything).

In a series of interviews between 1936 and 1939, Jung characterized Hitler as an archetype, often manifesting itself to the complete exclusion of his own personality. In reality, the opposite was true – the Third Reich was but a projection, an incarnation of Hitler’s personality (in other words, Hitler was the Third Reich).

“‘Hitler is a spiritual vessel, a demi-divinity; the messiah of Germany who teaches the virtue of the sword. ‘The voice he hears is that of the collective unconscious of his race'”. Again, al;l wrong with the exception of being a savior of Germany and the preacher of the salvific value of a sword (i.e. brutal military force).

Another (and a very different) strain of EN is represented by various neo-pagan organizations with close ties to political neo-Nazism, such as the Artgemeinschaft or the Heathen Front, and the obsession of many neo-Nazis with “classic” Germanic paganism remains an issue particularly in Germany.

IMHO, all EN followers had one and the same fundamental problem. While they correctly figured out that the Nazi civilization (and Adolf Hitler personally) did have a supernatural component (and a strong one at that), their perception of the nature of this component was grossly inaccurate (mainly because they went too far astray from Christianity).

The reality was not nearly as complicated as they perceived it to be. Adolf Hitler was chosen by the Supreme Power (the Christian God, to be more precise) to save the Christian Church (and thus the whole Christian Civilization) from being destroyed by the Bolsheviks – the (unconscious) servants of Satan. And thus our whole world from becoming a Hell on Earth in a very literal sense.

He received sufficient spiritual help (which resulted in his transfiguration in the summer of 1919) from the occult group (Thule Society) and possibly from the much more mysterious Vril Gesellschaft (believed by some to be the “inner circle” of Thule).

And subsequently a very tangible and practical help – the DAP party, the money, the ideology, the connections, the newspaper, the key personnel, etc. However, the Third Reich was viewed by the Supreme Power as a one-job (and thus a very short-lived entity). Hence, God allowed it to be destroyed by the victorious Allies (had the Nazis won the war, their regime would have been done away with by the Wehrmacht coup).

Monstrous crimes committed by the Nazis were viewed by the Supreme Power as an acceptable “collateral damage” (when the existence of the whole civilization is at stake, who cares about even 10 million victims?)