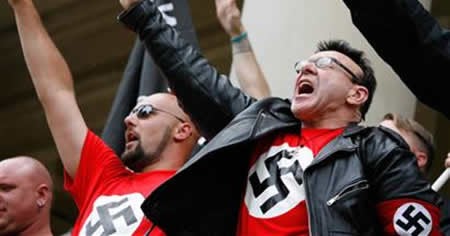 Contrary to a popular misconception, Neo-Nazis are fundamentally different from the original ones. The latter were national-sociopaths and, therefore, were driven primarily by deep, sincere and passionate (albeit not always efficient) love for their country and their people (although they did hate – and no less passionately – their real and perceived enemies).

Hence, unlike the original Nazis who wanted (and did) create a very unique civilization, neo-Nazis are a purely destructive force that can offer no positive (let alone attractive) vision whatsoever. And as purely destructive force, they (unlike the original Nazis) never had – and will never have – any noticeable support from the population. Anywhere.

True, the original national-socialism (Nazi ideology) created a highly distorted and thus grossly inaccurate perception of reality. Which inevitably led to colossal blunders which ultimately cost the Nazis (the original ones) their war, their state, their Party, their civilization, and for many – their very lives.

Hence, the Neo-Nazis are intellectually ignorant and politically impotent – and thus would have been accepted only by the SA and never by the SS. And would have definitely make the original Nazi leaders deeply ashamed of their… modern followers.

By definition, political (it is always political) Neo-Nazism describes any post-World War II militant, social or political movements seeking to revive the ideology of Nazism in whole or in part – obviously, the way they perceive this ideology (as they evidently do not understand it).

Neo-Nazism is considered a particular form of far-right ideology, politics and extremism which I find not exactly correct. IMHO, Neo-Nazis are the unique species outside of the political spectrum (actually, they have far more in common with left-wing extremists than with the right-wing politicians).

And for an obvious reason. While just about all the original Nazis were highly gifted and capable individuals who just wanted to (1) correct the real and perceived wrongs of the world around them; and (2) achieve far more than “the world” (i.e., the Weimar Republic) could offer them.

The Neo-Nazis are (with only very few exceptions) outcasts, pariahs and castaways neither willing nor able to achieve any kind of success (and not because of the deficiencies of the world but due to their own deficiencies).

The original Nazis can be hated (and usually are as there plenty of reasons to hate them), but most them are worthy of at least some respect. The Neo-Nazis deserve neither respect nor even hatred; they must be (mostly) ignored or (if they become a problem) neutralized – quickly and efficiently (ideally, without a shot being fired or even a drop of blood shed).