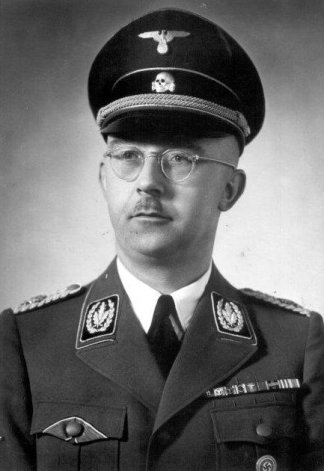 Aktion 14f13 was in many ways similar to Aktion T4 – the Nazi program of involuntary euthanasia of mentally ill, disabled, disfigured and inmates of hospitals and nursing homes deemed incurable by psychiatrists or physicians and thus judged to be unworthy of being members of Nazi society (which was considered a privilege by the Nazis). I will cover this program in appropriate detail in one of the next subsections.

So similar, in fact that I initially decided to include its description into the section on Aktion T4. However, I subsequently changed my mind as the victims of Aktion 14f13 fell into a very specific category – KL inmates. Consequently, I decided cover it in the section on Nazi internment camps.

The name of this mass murder project was reputedly coined by SS-Reichsfuhrer Heinrich Himmler and was based on SS record-keeping system, “14” for the Concentration Camps Inspector, “f” for the German word deaths (Todesfälle) and “13” for the means of killing, in this case gassing in the T4 killing centers (Hartheim, Bernburg and Sonnenstein) used by the project.

Aktion 14f13 (also referred to as “invalid euthanasia” or “prisoner euthanasia”) was triggered and driven by the same murderous (and equally deficient) Nazi logic as Aktion T4. By the time it was commenced in April of 1941, the Second Great War was already in full swing.

So not surprisingly, all KL were labor camps (forced labor and hard labor). Hence the camp administration (of any camp) considered valuable (and thus worthy of keeping alive) only those inmates that could work (in other words, were sufficiently productive).

All those who were not, were considered “useless mouths” and thus were condemned to “Sonderbehandlung” (“special treatment”) which was the euphemism for involuntary euthanasia (i.e. death).

This program was longer than Aktion T4 – it was in operation from 1941 to 1944 and later covered other groups of concentration camp prisoners. It was (not surprisingly) initiated by SS-Reichsfuhrer Heinrich Himmler who was ultimately in charge of all KL.

In late March of 1941, impressed by the results achieved by Aktion T4 by that time (he personally witnessed gassing of euthanasia victims in Poland), he approached Reichsleiter Philipp Bouhler, head of the KdF (Hitler Chancellery) and the nominal CEO of Aktion T4 (as I will later prove beyond the reasonable doubt, the actual CEO was Adolf Hitler himself).

In this fateful meeting, SS-Reichsfuhrer asked for Bouhler’s assistance in relieving KL (run by the SS) of “wasteful ballast” – sick prisoners and others no longer able to work and thus create value for the Nazi regime and the war effort.

In reality, “asked” is probably not the right word as by that time Bouhler already had the rank of Obergruppenführer (an equivalent of a three-star general in the SS) and thus was Himmler’s subordinate.

Consequently, it is far more likely that the Reichsfuhrer simply ordered Bouhler to provide the necessary assistance (personnel, tools, technologies, facilities, etc.) to the SS (of which he was a member since 1933).

At the end of 1941 Bouhler will be ordered by Himmler to provide assistance to a far more grandiose project – physical extermination of all Jews in German-controlled territories.

Being an SS-General, Bouhler had no other choice but to obey the order. Which was not a problem for him at all – he deeply and sincerely (and erroneously) believed that to win the existential war, the Third Reich simply had to physically eliminate all “unproductive ballast”.

So he called Viktor Brack, the head of Hauptamt II of the KdF (and the Chief Operating Officer of Aktion T4) and told him to implement Himmler’s order. Brack was also an SS officer (the Oberführer – senior colonel) and also a deep and sincere believer in the vital necessity of eliminating the “ballast”.

So he got to work – right then and there, wasting no time.