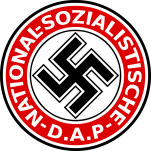 When Adolf Hitler joined then-DAP in September 1919, he did it with very specific (and highly ambitious – to put it mildly) objectives in mind. Obtain the absolute power in the Party; use this power (and his personal gifts and talents) to grow DAP into the most powerful political force in Germany; use this force to acquire dictatorial powers in Germany; and then use these powers (and the Party as one of the key tools) to perform a radical reengineering of Germany.

In other words, transform the defeated, depressed, humiliated, robbed, impoverished nation into a political, economic and military superpower. And make Germans a genuinely happy people.

As soon as Adolf Hitler achieved his first objective (on July 29th, 1921), all other ones became the objectives of the Party (by that time renamed NSDAP). Which were miraculously (the only word that adequately describes the results) achieved. One hundred percent.