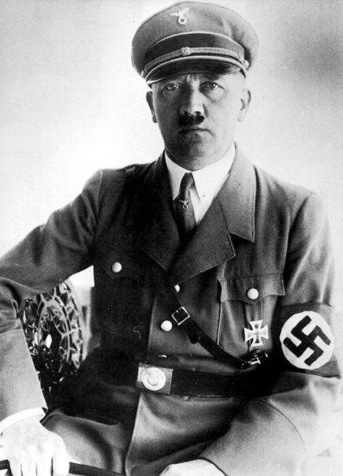 Let’s be honest – all leaders of charismatic totalitarian cults are psychopaths. Cut and dry, plain and simple, loud and clear. Psychopaths (among other deficiencies) feel no empathy for the people they harm. Most cult leaders care only about being worshiped and obeyed, and about living a life of luxury (which just about always includes unlimited sexual pleasure).

“Psychopaths are social predators who charm, manipulate, and ruthlessly plow their way through life, leaving a broad trail of broken hearts, shattered expectations, and empty wallets,” says Dr. Robert D. Hare in his book Without Conscience: The Disturbing World of the Psychopaths Among Us.

“Completely lacking in conscience and feelings for others, they selﬁshly take what they want and do as they please, violating social norms and expectations without the slightest sense of guilt or regret.” – he adds. Consequently, all charismatic totalitarian cults are created exclusively for the beneﬁt of its founder and leader.

Adolf Hitler was fundamentally different from all these cult leaders. He was not a psychopath, but a national-sociopath. And thus was driven primarily by genuine, deep and passionate love for Germany and Germans (these are not always one and the same).

And hence by the desire to make them genuinely happy by satisfying the aggregate needs of Germans – financial, functional, emotional and spiritual. Obviously, as he perceived these needs, which was not always accurate (national-socialist ideology created highly distorted and thus grossly inaccurate perception of reality).

He had no desire to live a life of luxury – his dwellings until the very last months of the war (when they became outright Spartan) were comfortable, but not nearly luxurious. He was financially wealthy, but not super-rich and he spent most of his wealth (obtain mostly via sales of Mein Kampf) on the needs of the Nazi Party and the Nazi State (and thus of the German people).

True, he wanted to be unquestionably obeyed, but he sincerely considered it necessary to achieve his ultimate objective – genuine happiness of the German people. He had no desire to be worshipped and he viewed his “personality cult” as a “necessary evil” of sorts – the tool that he needed to serve Germany and Germans in the most efficient way.

He flatly refused well-deserved decorations (i.e. the Knight’s Cross) and no less well-deserved promotion to the rank of a general, considering himself a simple soldier serving his adopted Fatherland – Germany.

For such a passionate leader, he had surprisingly little interest in sex. There is no incontrovertible evidence that he had sex with a woman prior to starting a relationship with Eva Braun in 1931 when he was already forty-two (whether he had a sexual relationship with Geli Raubal is still an open question). And after Eva became his lover, he was totally and completely faithful to her.

However, Adolf Hitler was a national-sociopath (i.e. psychopath – in this context these are synonyms) which meant that he had no empathy for individuals and nations other than Germans. Completely lacking in conscience and feelings for these “alien” individuals and nations, Adolf Hitler selﬁshly took and did what he believed he needed to make Germans genuinely happy – without the slightest sense of guilt or regret of the harm he inflicted on “aliens”.

Just about all leaders of charismatic totalitarian cults (and leaders of many other cults) are megalomaniacs (in medical terms, they suffer from narcissistic personality disorder – NPD).

People with narcissistic personality disorder (NPD) are characterized by persistent grandiosity, excessive need for admiration, and a personal disdain and lack of empathy for others.

Grandiosity, by definition, is an unrealistic sense of superiority, exaggerated feelings of self-importance, a sustained view of oneself as better than others that causes one to view others with disdain or as inferior, as well as to a sense of uniqueness: the belief that few others have anything in common with oneself and that one can only be understood by a few or very special people.

Contrary to a popular misconception, the adjective “unrealistic” does not apply to cult leaders. Because these characters do have superior intelligence as well as assessment and manipulation skills (otherwise they would not have acquired such a tremendous power over people – sometimes over many thousands).

Thus they are “functionally superior” to the overwhelming majority of individuals (as they can do what just about nobody else can) and, indeed, very few others (mostly leaders of other cults) have anything in common with them. Which, obviously, does not give them the right to view others with disdain.

The person with NPD usually displays arrogance and a distorted sense of superiority, and seeks to establish abusive power and control over others. In other words, he or she (although megalomaniacs are overwhelmingly male) is obsessed with the exercise of power, especially in the domination of others.

Again, Adolf Hitler was both similar to and very different from leaders of charismatic totalitarian cults. He was the most successful political entrepreneurs in modern history and hence was far superior to just about everyone else (except possibly Joseph Stalin).

However, he did not seek power for the sake of power (or domination for that matter). He fought for absolute power because he believed that he needed it to make Germans genuinely happy.

His power was not abusive – in fact, he was a caring and considerate boss. Which means that he did have empathy – and a pretty strong one – but only for fellow Germans (and other Aryans).

And, given the magnitude of his Mission (and specific jobs that he had to do) his feeling of self-importance was completely justified. No one else could fight and win the genuinely existential war with Bolshevism; liberate Germany from the humiliating constraints imposed by the “Versailles criminals”; unite all Germans into Ein Reich; transform defeated, robbed, impoverished and depressed nation into an economic, political and military superpower; restore German power and glory, heal psychological traumas of Germans and make them a genuinely happy nation.