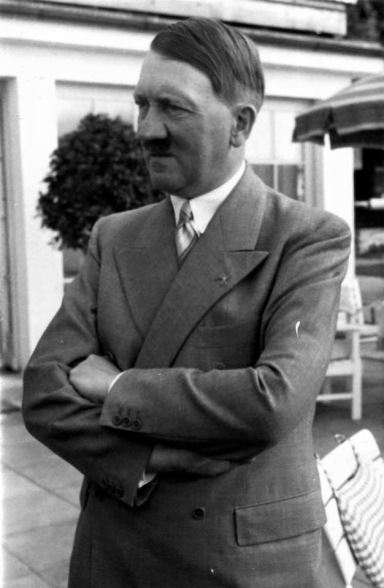 Now let’s talk about cults (more precisely, about destructive totalitarian charismatic cults) and draw some parallels between these groups and Nazi Germany.

Actually, the adjective “charismatic” is redundant, because just about all cults were founded by charismatic, and always self-appointed, leaders who often attribute divine qualities to themselves.

If the leaders don’t claim to be God, they at least claim to be a personal representative who speaks for God. In addition, most cult leaders claim to have some type of supernatural or superhuman powers or abilities.

Or claim to have exclusive access to some universal truth or knowledge unknown to anyone else in the world. Because of this, cult leaders often feel that they are not bound by normal social, legal, or moral limitations of conduct.

At the trial of Rod Ferrell – founder of the vampire cult who is currently serving LWOP (life in prison without parole that is) for the 1996 murder of Naomi Ruth Queen and Richard Wendorf, a mental health professional testified that “the goal of the cult [actually of any destructive cult] is to release evil into the world and extinguish light”

The terms “Good” and “Evil” do not belong to historian’s vocabulary (or to the vocabulary of a psychiatrist for that matter) – they are the domain of priest, theologians and secular ethics professionals.

Hence, this statement must be rephrased. “The goal of a destructive cult is to release into the world a certain power which will be then used to annihilate the opposing force”. In other words, the adversary of the cult in question (which very well may be another – explicit or implicit – cult).

This appears to be exactly the case with Adolf Hitler and the cults (in plural) that he created. Both the Nazi Party and the Nazi State were created to release into the world the mighty spiritual power of national-socialist ideology, symbols such as swastika, of Adolf Hitler’s personally, etc.

This power will then be used to destroy the key opposing force – Bolshevism (the arch-enemy of National-Socialism) and its adversary in the existential war for the future of Germany, Europe and the whole Western Civilization.

Likewise, the Russian Communist Party (Bolsheviks) and the Soviet State were destructive totalitarian charismatic cults created to release into the world the mighty spiritual power of Bolshevist ideology, symbols such as Red Star, hammer & Sickle, of Joseph Stalin’s personally, etc.

This power will then be used to destroy all opposing forces – National-Socialism, Western Liberalism, Fascism, etc. and all religions – Christianity, Buddhism, Judaism (which makes the concept of “Judeo-Bolshevism” certifiably insane), Islam, etc.

Which made a fundamental difference between Nazi and Bolshevist cults – while the former wanted to annihilate only the latter and was willing to more or less peacefully coexist with all others, the latter wanted to eliminate all opposing forces and thus to ideologically conquer (brainwash) the whole world.

Consequently, the struggle between Nazism and Bolshevism on the Eastern Front of the Second Great War was an epic battle between two destructive totalitarian cults – the Führerstaat and the Soviet State – and their charismatic leaders (Adolf Hitler and Joseph Stalin).

Formally, Hitler lost the war and Stalin won it. However, the former did prevent the latter from achieving his ultimate objective – conquering the whole Europe. Consequently, Adolf Hitler, NSDAP and the Führerstaat (and the whole Third Reich) fulfilled their Divine Mission.