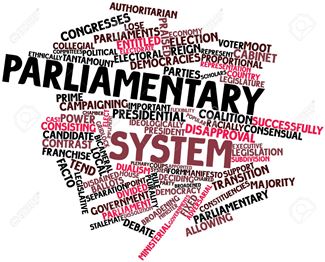 During my stay in Vienna, I developed a rock-solid view on another issue – the parliamentary democracy. Initially, I was so much impressed by the British political system that I was very much in favor of the parliamentary institutions.

However, a year of quite observations of what was really going inside the Austrian parliament (Reichsrat – Imperial Council) made me change my mind – and change it radically. In other words, it was more than sufficient to radically transform (i.e. completely destroy) my initial opinion as to the character of this parliamentary institution.

I no longer opposed merely the perverted form which the principle of parliamentary representation had assumed in Austria. It had become impossible for me to accept the system in itself.

Up to that time I had believed that the disastrous deficiencies of the Austrian parliament were due to the lack of a German majority, but now I recognized that the institution itself was fundamentally wrong in its very essence and character.

Within the course of a few years, I came to form a clear and vivid picture of the average type of that most highly worshipped phenomenon of our time—the parliamentarian.

The picture of him [there were no women in the Reichsrat] which I then formed became deeply engraved on my mind and I have never altered it since, at least as far as essentials go.

Democracy, as practiced in Western Europe to-day, is the forerunner of Marxism. In fact, the latter would not be conceivable without the former. Democracy is the breeding ground in which the bacilli of the Marxist global pest.

[Wrong. In reality, Marxists (Bolsheviks, to be more precise) managed to seize power (via a practically bloodless coup) only in Russia where the Western parliamentary system simply did not exist. In no country were the Marxists able to come to power via parliamentary elections].

The worst (and the most fundamental) deficiency of the parliamentary system is the manifest lack of any individual responsibility in the representative body.

Parliament passes some act or decree which may have the most devastating consequences, yet nobody bears the responsibility for it. Nobody can be called to account, for surely one cannot say that a Cabinet discharges its responsibility when it resigns after having brought about a catastrophe.

Is it not considered right that, instead of developing constructive ideas and plans, the business of a statesman consists in the art of making a whole pack of blockheads understand his projects so that they will grant him their generous consent?

In this world is not the creative act of the genius always a protest against the inertia of the mass? What shall the statesman do if he does not succeed in coaxing the parliamentary multitude to give its consent to his policy?

Or, when confronted with the obstinate stupidity of his fellow-citizens, should he refrain from pushing forward with the measures which are of vital necessity to the life of the nation?

Should he resign or remain in power? In such circumstances does not a man of character find himself face to face with an insoluble contradiction between his own political insight on the one hand and, on the other, his sense of decency or, better still, of honesty?

Where can we draw the line between duty to the public and the obligation under which personal honor places a man? Must not every genuine leader renounce the idea of degrading himself to the level of a political jobber?

And, on the other hand, does not every jobber feel the itch to ‘play politics,’ seeing that the final responsibility will never rest with him personally, but with an anonymous mass which can never be called to account for its actions?

Must not our parliamentary principle of government by numerical majority necessarily had to the destruction of the principle of leadership?

The parliamentary principle of vesting legislative power in the decision of the majority rejects the authority of the individual and puts in its place the strength of the majority in question. In doing so, it contradicts the aristocratic principle, which is a fundamental law of Nature.

This institution [Parliament] is primarily responsible for the inrush of second-rate people into the field of politics. Confronted with such a phenomenon, a man who is endowed with real qualities of leadership will be tempted to refrain from taking part in political life, because under these conditions the situation does not call for a man who has a capacity for constructive statesmanship, but rather for a man who is capable of bargaining for the favor of the majority.

This invention of democracy is very closely connected with a peculiar phenomenon which has recently spread to a pernicious extent, namely, the cowardice of a large section of our so-called political leaders. Whenever important decisions have to be made, they are always fortunate in being able to hide behind the so-called majority.

That is the main reason why this kind of political activity is abhorrent to men of character and courage, while at the same time it attracts inferior types, for a person who is not willing to accept responsibility for his own actions, but always seeks to be covered, roust be classed among the cowards aid the rascals. If the leaders of the nation are of such miserable stuff, the evil consequences will soon manifest themselves.

[He was absolutely right – the parliamentary democracy of Weimar Republic was no match politically for the ruthless Bolshevist Soviet Union. Had Nazis not come to power in Germany in 1933 and transformed it into a totalitarian Führerstaat, Germany would have certainly been conquered and destroyed by the Bolsheviks]

One truth which must always be borne in mind is that the majority can never replace the man. The majority represents not only ignorance but also cowardice, and just as a hundred morons do not equal one man of wisdom, so a hundred cowards are incapable of taking any political line of action that requires moral strength and fortitude.

The inevitable result is that the intellectual level of the ruling class sinks steadily. One can easily forecast how much the nation and the State are bound to suffer from such a state of affairs.

There is no other principle which turns out to be quite so ill-conceived as the parliamentary principle, if we examine it objectively. It is quite evident that only to a tiny degree are public wishes or public needs satisfied by the manner in which an election takes place, for everybody who properly estimates the political intelligence of the masses, can easily see that this is not sufficiently developed to enable them to form general political judgments on their own account, or to select the men who might be competent to carry out their ideas in practice.

[This indictment of a parliamentary system is as powerful as it is fundamentally wrong. For a very simple reason – an individual capable of “creative act of genius” in identifying “measures which are of vital necessity to the life of the nation” must have the power to impose his will on the whole population of the country in question.

Which automatically means that he has the power to impose his will on a very small number (compared to the overall population) of members of the Parliament. Churchill and Roosevelt are but two examples that immediately come to mind.

The parliamentary system has a very important advantage – it provides tools for minimizing risks of a catastrophic blunder by the leader of the country [President, Prime Minister, etc.].

Dictatorship is the only solution when a general miracle (i.e. Quantensprung) needs to be performed either in civilian life or in the battlefield (which was exactly the case in Germany in 1933). However, even then some form of risk management system is needed (which has been proven beyond the reasonable doubt by the ultimately catastrophic results of Nazi rule)]