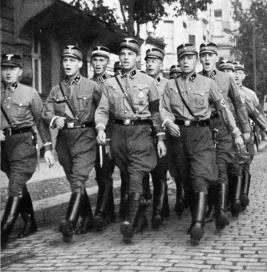 Named after General der Infanterie (three-star general) Oskar von Hutier (who did not invent but extensively and very successfully used this tactics), it used small squads of a few soldiers each to stealthily infiltrate enemy trenches and cleanse them using superior firepower – hand grenades, light machine guns (later in the war MP-18 submachine guns) and flamethrowers. And – when necessary – handguns and combat knives.

Hitler first used security guards (precursor of SA) in October 1919 – a month after he joined the party and began speaking at DAP meetings on a regular basis. The permanent security unit (then called Ordnertruppen) was established four months later – in February 1920.

It was also when the future SA received their now (in)famous brown uniforms. Brown shirts and trousers were chosen as the SA uniform for purely financial reasons. In 1920 when the first SA units were formed, a large number of these uniforms were cheaply available, having originally been ordered during the war for colonial troops posted to Germany’s former African colonies, but never used.

The unit developed by organizing and formalizing the groups of ex-soldiers and beer hall brawlers who were to protect gatherings of the Nazi Party from disruptions from Social Democrats (SPD) and Communists (KPD) and to disrupt meetings of political opponents.

Ordnertruppen was led by Emil Maurice – a half-Jewish (believe it or not) Hitler’s first personal chauffeur. Subsequently he participated in the Beer Hall Putsch, was incarcerated in Landsberg prison with Adolf Hitler (he even helped the latter with writing Mein Kampf) and then was one of the co-founders of the (in)famous SS – he was SS #2 (SS #1 was Adolf Hitler himself).

Due to his Jewish heritage, and his 1927 brief relationship with Hitler’s half-niece Geli Raubal, he fell out of favor with Hitler and rose in the SS only to the rank of Oberführer (“senior colonel”).

When SS Reichsfuhrer Heinrich Himmler learned that Maurice “according to his ancestral table, is not of Aryan descent”, he recommended that Maurice be expelled from the organization.

To Himmler’s annoyance, Hitler stood by his old friend (as he always did). In a secret letter written on 31 August 1935, Hitler ordered Himmler to make an exception for Maurice and his brothers, who were informally declared “Honorary Aryans” and allowed to stay in the SS.

In 1936, Maurice became a Reichstag deputy for Leipzig and from 1937 was the chairman of the Munich Chamber of Commerce. From 1940 to 1942, he served in the Luftwaffe as an officer.

After the war he was arrested by the allies, and in 1948, sentenced to four years in a labor camp in a typical “victor’s justice” as he committed no crimes whatsoever. Released in 1951, he acquired a watch shop in Munich and run it after his died in 1972.

Hitler informally gave SA its permanent name in September 1921, although officially it was called “Gymnastic and Sports Division” of the party (Turn- und Sportabteilung), perhaps to avoid trouble with the central government that just about at that time banned all right-wing paramilitary organizations. By that time, it had roughly 300 members.

Maurice became the first Oberster SA-Führer (“Supreme SA Leader”) and bravely led the SA stormtroopers in fights with Communists, Social Democrats and other political opponents of the Nazi party.

However, Hitler soon decided that SA needed more professional military management and so replaced the watchmaker Maurice with 23-year old Hans Ulrich Klintzsch – ex-naval (Marine, actually) lieutenant, decorated war hero (he was awarded the Iron Cross both Second and First Class) and the ex-officer in the Erhardt Brigade – the most efficient and distinguished Freikorps.

Klintzsch was suspected of having a hand in 1922 in the murder of Walter Rathenau – the Reich Foreign Minister, of Jewish background and, as main author of the ‘fulfilment policy’ towards the Versailles Treaty, a detested figure on the extreme Right.

However, given the fact that Adolf Hitler was always firmly opposed to political assassinations (in his opinion, they never produced any valuable result), these suspicions are most likely completely unfounded.

He served in this position until February 1923 when he went back to the German Army and ceded his command of SA to Hermann Göring – another war hero and decorated military officer. Klintzsch ultimately went to serve in the Luftwaffe, where rose to the rank of Oberst (Colonel). He died in 1959 during the wedding of his son Fridthjof.

Under Klintzsch’s leadership, SA members were actively training, preparing for what they saw as practically a civil war at home (i.e. violent combat with their political enemies) evoking the spirit of aggressive camaraderie and blind commitment to the leader (i.e. Adolf Hitler).

Contrary to a very popular misconception, the (in)famous Ernst Röhm was not the first, but the fourth leader of the SA. The basis for this misconception is that the “original” SA was banned by the Bavarian government after the Beer Hall Putsch in November 1923 and thus ceased to exist.

Röhm was an active participant of the putsch and thus was arrested and subsequently tried by the Munich People’s Court in February 1924. He was found guilty of high treason but the sentence was suspended and he was granted a conditional discharge.

Which allowed him to reincarnate the SA under the name Frontbann (he had been given authority by Hitler to rebuild the SA in any way he saw fit). The reincarnation “walked like a duck”, “looked like a duck” and “quacked like a duck” (i.e. SA) as it had the same members and performed the same functions. Frontbann was disbanded in February 1925 after the ban on the SA was lifted and was reformed back into the SA.