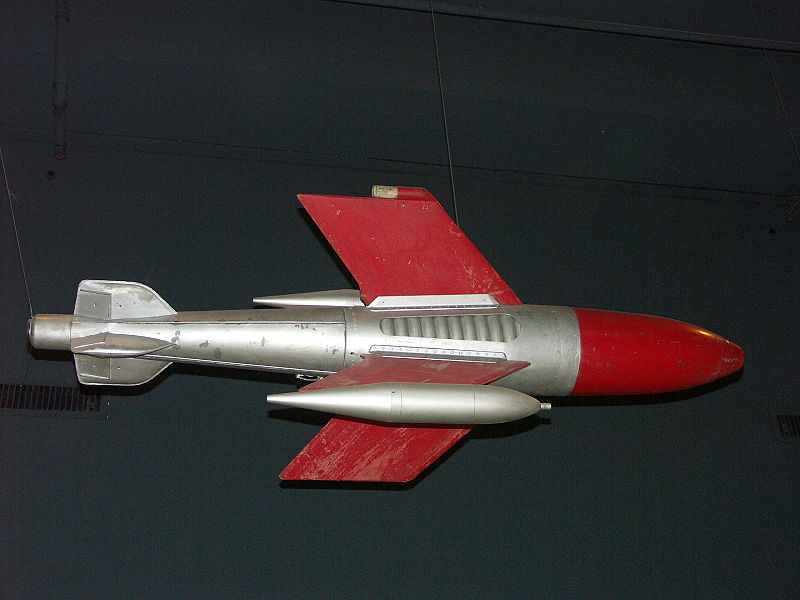 Unlike all other Wunderwaffen covered in this section, Ruhrstahl X-4 – a wire-guided air-to-air missile – was never operationally deployed. It also did not much influence the development of modern air-to-air missiles which are either infrared- or radar-guided.

However, the X-4 became the first mass-produced air-to-air missile (by the end of the war, Ruhrstahl manufactured more than a thousand missiles). Its anti-tank version (X-7 Rotkäppchen) also significantly influenced (became the basis, actually) for most modern anti-tank missiles – BGM-71 TOW (standard anti-tank missile of the US Army and one of the most commonly used such missiles in the world), Soviet AT-1, AT-3, AT-4 and AT-5, British Malkara and Swingfire, French/West German MILAN, Chinese HJ-8 and others.

Consequently, I deemed it appropriate to include X-4 into the list of German Wunderwaffen.

The key reason why X-4 (and X-7) were not operationally deployed was that the work on these revolutionary weapons started way too late – in June 1943 (it should have started eighteen months earlier – right after failure of blitzkrieg on the Eastern front in December 1941).

By early summer of 1943, it became painfully obvious that the Allied heavy bombers present a strategic (and possibly even existential) threat to Nazi war machine and the civilian population of Germany.

It was also no less painfully obvious that 20-mm cannons of Luftwaffe fighters and ground-based anti-aircraft guns were woefully inefficient against huge four-engine strategic bombers of Royal Air Force and the U.S. Army Air Corps. And both day- and night fighters of Luftwaffe turned out to be highly vulnerable to defensive guns (powerful Browning M2 .50 caliber machine guns) of Allied bombers.

Hence, a far more powerful and efficient weapon was needed. The weapon that could kill with one decisive blow any Allied bomber while allowing the Luftwaffe fighter to stay beyond the effective range of its defensive guns.

Consequently, the weapon (that could be only a guided AA missile) had to have enough range to allow it to be fired from outside the range of the bombers’ guns (what is now called a stand-off weapon), while having a powerful enough warhead and being guided with enough accuracy to guarantee a kill.

The X-4 met these specifications and more; its BMW 109-448 rocket motor accelerated the missile to over 1,150 km/h and kept the missile there during its flight. Its efficient range was between 1.5 and 4 km while the M2 had a maximum effective range of about 1000 m.

The missile was spin-stabilized at about 60 rpm, so any asymmetrical thrust from the engine or inaccuracies in the control surfaces would be evened out. Signals to operate control surfaces on the tail were sent via two wires (a method chosen to avoid jamming).

The wires unwound from bobbins housed within long, bullet-shaped fairings, themselves mounted either on the roots of an opposing pair of the larger mid-body fins (there were four, swept 45°). or on those same fins’ opposing tips; these contained a total of about 5.5 km (3.4 mi; 3.0 nmi) of wire.

The missile was controlled by a joystick in the cockpit of a fighter and a gyroscope kept track of “up” so control inputs from the pilot’s joystick in the launch aircraft could be translated into yaw and pitch as the missile spun. Flares attached to two of the midsection wings were used to keep the missile visible to the operator through the smoke of its motor.

X-4 warhead consisted of a 20 kg fragmentation device that had a lethal radius of about 8 m. It was initially thought that the guidance system would allow the pilot to get the missile into this range, but it was quickly discovered that at the ranges the missile could operate at it would be almost impossible to judge range to anywhere near this accuracy.

For this reason the X-4 mounted a proximity fuse – an acoustical system tuned to the 200 Hz sound of the B-17’s engines in cruise, activated by the Doppler shift as the missile approached.

The first flight test of the missile took place on August 11, 1944 from a Focke-Wulf Fw-190. Subsequent tests used the Junkers Ju-88 and the jet-powered Messerschmitt Me 262 as the launch platforms.

The X-4 had originally been intended for use by single-seat fighters (more specifically, by the revolutionary Focke-Wulf Ta 183 Huckebein, which never got out of the project stage), but the problems in guiding both the missile and the aircraft at the same time proved insurmountable. Consequently, the X-4 was re-directed to multi-seat aircraft like the Ju-88, He-219 and the like.

The X-4 was designed to be easily assembled by unskilled labor and airframe production began in early 1945 incorporating low-cost non-strategic materials, such as wood for fins. Which allowed Ruhrstahl to manufacture over a thousand of missiles even in the seemingly impossible conditions at the end of the war.

After the Kursk disaster, the Wehrmacht finally recognized the magnitude and seriousness of the threat presented by the Soviet tank armadas. Consequently, parallel to the development of AA missile, Ruhrstahl began work on the development of its anti-tank sister – the X-7. The weapon was called “Rotkäppchen” (Red Riding Hood) for some unknown reason.

The first trials took place in September of 1944 and were not very successful (to put it mildly). Seven X-7 missiles were fired. Because of the unusual and unfamiliar flying characteristics the first four weapons had ground contact after some distance and therefore crashed. On the next two the rocket engine exploded on the way to the target. Only the last missile flew all the way and hit the target tank at a range of 500m dead center.

Ruhrstahlwerke in Brackwede and the Mechanische Werke in Neubrandenburg somehow managed to complete about 300 X-7 missiles which were all captured by the Allies (mostly, by the French army).

There were rumors (unconfirmed by any evidence) that a few X-7 were actually deployed and used in the Eastern front with deadly efficiency even against heavy IS-2 tanks.

After the war, French engineers developed a domestic version of the X-7, the Nord SS.10. Ultimately, over 30,000 missiles had been built. The missile was used by French, Israeli (ironically) and US armed forces (the latter under a designation of MGM-21A)